After years of playing Video Poker, I found that the following tips are very helpful to hitting a Royal Flush, so I want share these tips with you here. I hope these helpful hints will get you closer to the fortune of hitting a royal flush. 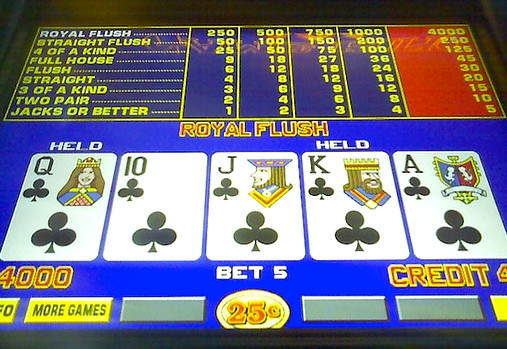 There are a lot of myths surrounding video poker machines. A couple of these are:

There are many popular myths. Just use common sense. Remember these are machines, and they cannot even be tightened by the casino, although I sometimes wonder. It is all just random shuffling and dealing at a precise millisecond.

Know how the machine plays.

Knowing exactly how the machine deals has always been helpful to me. When the machine deals, it deals five cards behind with five cards in front, which are the cards that you see on the screen first. When you throw away a card in the second position, say, the card that was already dealt right behind it is the card that will show up. The next hand has nothing to do with the previous hand, as, like I said before, the cards are shuffled every millisecond.

Whenever possible, always leave the hand open for a royal.

This is singly the most important factor in hitting a royal. What this means simply is that you can’t hit a royal if you are holding cards that don’t fit into a royal. The strategy that I have used has been if I have three to a royal, anything else in the hand goes except in the case of a three of a kind, although I imagine there have been royals behind some of them. Here are some of the hands I would sacrifice for three to a royal: Low pair, jacks or better, two pair, four to a flush and four to a straight. If dealt only three high cards with two to a royal, hold two to a royal. If dealt only two high cards of different suits, hold only one card; you choose. I tend to hold the higher card. At all costs throw away the odd card in four to a royal. Unless maybe you get dealt a straight flush to the king. I have heard of people throwing away the nine in a straight flush to the king and catching the ace. I would tend to keep the straight flush.

I know this can be difficult to do at times. If you are going to go out and gamble on video poker machines, you should only play what you can afford to lose, if you lose. I have found that a good number of coins to start off with is between 300 and 400. If you can’t keep playing very long on that many coins, then chances are you should stop. There are times I should have followed that advice myself.

I hope that these tips help you in your endeavor towards the royal. But most of all, have fun playing, because that’s what it’s really about. If you’re not having fun, why play?